Minutes of the February 3, 2015 meeting of the NVRC

Self defense workshop. Tara got quotes from two local martial arts studios to present a 2-hour self defense workshop for runners. The fee was the same but Monarch Martial Arts offered the best arrangement. Tara will set up registration for a March 13 workshop, with a discounted fee for club members.

Wilderness training. Mike Casper is working on a wilderness first aid workshop to be held at Appalachian Outdoors as part of their Free U series. We agreed to pay the $50 donation for the speaker as long as the club is recognized as a sponsor.

Indoor mile series. Amy reminded everyone that Wednesday was the last day to register for the final indoor mile and 3K and encouraged those not racing to come watch.

Used shoe collection. Dave DeGroote reported that he has filled one box of shoes with 50 pairs collected at First Night. He will continue to collect shoes at races and club meetings.

Youth track meets.  Tony and Mark would like to build on the success of Nittany Track & Field with some sanctioned youth track meets. They are looking at a potential outdoor meet in June and and indoor meet next winter. Mark thanked the NVRC for its support of NTF.

Marathoners for Medicine. Jaimie invited runners to join the Centre Volunteers in Medicine Marathoners for Medicine Challenge team, which already includes 18 undergrads and 24 other runners, with 11 new this year. Anyone running a marathon, half marathon, or long trail race this spring is invited. Contact Jaimie at This email address is being protected from spambots. You need JavaScript enabled to view it. for more information or to sign up. 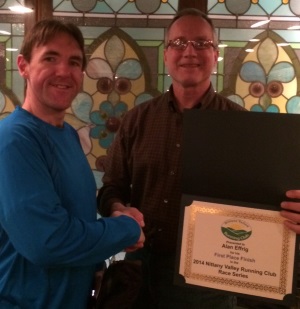 Race Series awards. Awards for the NVRC 2014 Race Series Cup were presented. The series has been going since 2008 and will be continued in 2015. Alan Effrig is going to help Jake Clements.

Effrig won the series with 143 points. Tom Cali had the second highest total but was on hiatus after winning last year. 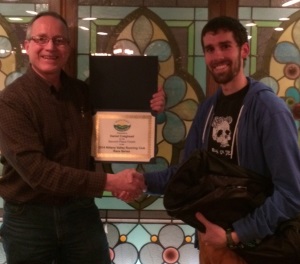 Dan Craighead was second with 129 points and Tara Murray was third with 120. The top three received awards and others reaching certain point totals got Rapid Transit gift cards.

Mike Casper and Jaimie Wright got silver, and Marty Mazur got bronze. 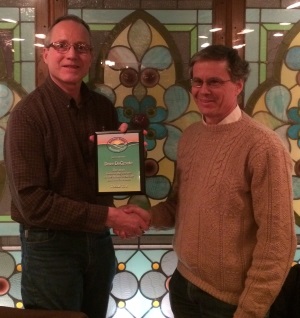