Minutes of the December 7, 2010 Meeting of the NVRC

It was a big crowd for the last meeting of the NVRC in 2010. Dave DeGroote, Kathy Koetje-Simin and her two boys Noah and Alec, Martha Nelson, Tom Cali, Bob Boozer, Marty Mazur, Cheryl Capone and her boy Brian, Mike and Evan Casper, guest Ron Quinn of Housing Transitions, Inc., Amy and Mike Blake, Kim Nelson, guests Will West of the State College Spikes and his girlfriend Dannie, Jerry Steffy, Marty Klanchar, Todd Baney, Rich Olson, Tara Murray, and Kim Gasper and her son Jonathan took up four or so tables and took in 5 pizzas and more than 5 pitchers.

It was too soon after the Half-Marathon for Dave Eggler to give a report on how the race did financially. My guess is very well, since there was a record field of over 650 runners, 200 more than the previous record. Kathy Koetje-Simin was at the meeting to proudly show off the NVHM T-shirt, on which she appears heading up the famed "Spiral of Death".

Will West of the State College Spikes was at the meeting to present a couple of alternatives for use of Medlar Field for staging next year's Art's Festival. That ballpark has become a popular staging area for several campus events. There is water, electricity, bathrooms, and shelter from the sun. And we've settled in on designs for the 5K and 10K courses over the last few years. Finally, the kids really seam to like the quarter and half-mile races on the ball field itself. The Spikes gave a couple of options for the Race Directors Jerry Steffy and Dave Eggler to mull over. They do not represent an increase over last year's price.

Todd Baney will be putting on an April Fool's 5K next April 2 to raise funds for a scholarship fund for Penn State students from Centre County high schools. Race planning is shaping up. Details are on the calendar. Also shaping up are plans for the first annual Centre County Firefighters Combat Challenge 5K Run/Walk, to be held on April 16. The course will be on West Branch Road between Rt 45 and South Atherton. W. Branch, a pleasant, winding, and relatively flat country road will be closed to traffic during the race.

Mike Casper put on another very successful Tussey mOUnTaiNBACK 50 Mile Ultramarathon and Relay. Next year's race will change the tradition a little: due to concerns from the PA Department of Conservation and Natural Resources about crowds on the road during hunting season, future races will be moved to Sundays. Next year's race will be on October 23. But one "tradition" that won't change: next year's race has again been chose by USATF to be the National 50 Mile Ultramarathon Road Race Championship. Mike was also happy to report that this year's race raised $14,000 for its beneficiary, Housing Transitions, Inc. Ron Quinn, he Executive Director of Housing Transitions was present to accept the check.

At our next meeting on February 1, there will be a presentation of awards for this year's NVRC Race Series and Volunteer of the Year. Provisional results are  up on the web site at:

Barring any changes due to scoring errors, it looks like the Race Series has been won by Cory Neff, with Meira Minard and Alan Effrig taking 2nd and 3rd. The Volunteer of the Year top point-getter was again Dave Eggler. However, Dave is eschewing awards since winning in 2008. So this year's Volunteer of the Year is Mike Casper. Marty Mazur and Jerry Steffy took the next two spots. We hope all these winners can attend the next meeting. We will also announce changes in the Series: New races, new opportunities to score points! 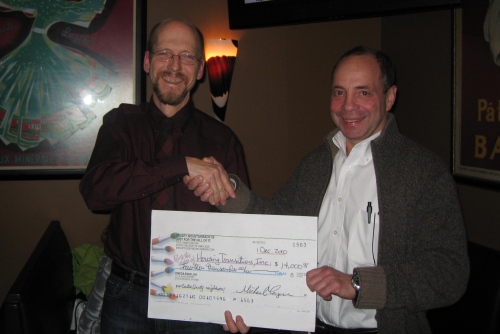