Marathoners For Medicine Team Surpasses $500,000 In Donations for CVIM

Twenty-six runners participated on this year’s team by competing in a spring marathon or half-marathon. Tom Cali led fundraising efforts with $7,500.00 raised for CVIM.

Download the May 2014 Treasurer's Report here. This report contains information for 2003 through 2013 inclusive.

The second talk in the Krush Program Speaker Series will be held on Monday, March 19 at St. Joseph's Catholic Academy at 901 Boalsburg Pike in Boalsburg. Artie Gilkes and Olympic hopeful Rebecca Donaghue will give a talk titled Drills To Improve Running Economy. Information is here.

As one of the webmasters of the NVRC site, my name is plastered all over it. And because of this, I get emails several times a year from out-of-towners looking to join one of our Weekend Group Runs. Recently, we hosted a couple of ladies on a 10 mile run through Spring Creek Canyon. The two sisters, 'Salty' and 'Cinnamon' are among the authors of a group blog, Salty Running. By my count, there are ten authors, each with a "spicy" handle. (In keeping with their blog style, they'll remain anonymous here, too). They're all women, and the writing tends to center on women's running, but I'm sure there's something of interest to everyone. Recent topics include some of the usual runner talk: training, olympic predictions, marathons, ultras; but also some spicier topics: running and pregnancy, a runner's guide to bouncing boobs, pre-race sex, and recently, 5 Types of Running Guys. In that last post, Salty talks about the kinds of guys women have to put up with, especially since the ladies are usually outnumbered on group runs. The thing is that Salty ends the article with a really nice shout-out to the NVRC and her experience on our group run. It seems we "flunked" all the tests! Give the blog a visit.

NVRC Marathoners For Medicine In Action With New Coach

The NVRC Marathoners for Medicine is a group of runners dedicated to running and to raising money for Centre Volunteers in Medicine. CVIM is a non-profit clinic that supplies quality medical and dental care to local residents who have no health insurance. For years, the Marathoners For Medicine have had Joe and Sue Paterno and Olympian Greg Fredericks as their honorary coaches. This year, the teams will be running to honor the memory of JoePa, and will be coached by Greg Fredericks, Sue Paterno, and Russ Rose, Penn State's legendary women's volleyball coach.

Once limited to runners who qualified for the Boston Marathon, Marathoners for Medicine is now open to participants in the Boston (April 16) and Pocono (May 20) Marathons and the Pittsburgh Marathon and Half-Marathon (May 5). Go to the CVIM site. Find out about this worthy organization. Meet some of the runners, many of whom I'm sure you know. Please consider making a donation to CVIM through the Marathoners for Medicine in the name of one of the runners (or in the name of all participants). 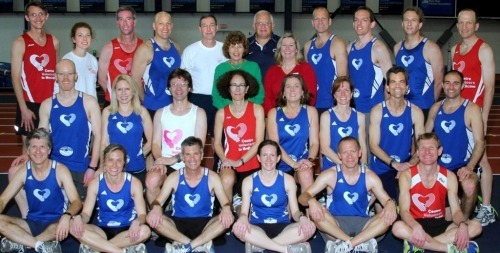 Marty Mazur and his family recently hiked the Cherry Run Trail near Lamar, PA. The trail would also make a nice trail run, though challenging in spots. Here's a link to Marty's report on the trail.